I just have to vent for a second because I have nothing to post!

If you had to drive up to a card swiper to get through a gate in order to park each day, wouldn't you have your ID ready when you got to the reader?!! I shake my head just about every day because someone pulls in, sometimes they're talking on the cell, other times I can see them searching for their ID. It drives me out of what's left of my mind!! HELLO.....you have to do this every day. Why don't you think of it on your way up the street, or leave it in a spot in your car so that you have it ready?! This way others won't sit behind you or on the street in traffic, waiting for the line of cars to pull in!!

And number two pet peeve for today: If I take the time to wait and hold the door for you, would you PLEASE take the door and maybe say thank you?! I've had people come up and walk right in so I'm left holding the door. I think I was nice enough to hold it. Why do I have to stand there and wait until they let the second door slam on me while the first one is being held?!

I feel so much better. Thanks for listening!!

Oh, and I'm having issues making cards in the new but not organized room. I cannot find any bling. What did I do with it?! I'm all discombobulated (sp.?).
Posted by Michelle Quinno at 10:08 AM 3 comments:

First off, my apologies if you are on FB and this is duplicate info.

My cork flooring was installed in my new craft room this weekend. I think I like it. It's very different and looks so much nicer in person. I love the celery green color, that's for sure. I'm just not a blue person. Green is a comfortable color for me.

Anyway, my hubby scrambled until 11 p.m. on Sat. night to get the moldings put back on and he got my armoire back in the room. I think he was going to hold off until i reminded him that my mom would be home from FL tonight and the armoire was blocking her door! :-)

Last night we brought a bunch of boxes up and I started to put things away. I just have no idea how to organize it. We brought up a 5 shelf oak bookcase from the basement because we weren't using it. I quickly filled that up. We need to redo the closet with shelves rather than the hanging rack that's there. I still have a bunch of boxes in the living room but I need to empty out a few before I can bring more up. There's not a lot of space in this room!

I decided I was really happy I didn't have carpet last night. One of my little embellishment drawers opened and all my eyelets and clips came crashing down in a heap on the floor. It was easy to scoop them up in a pile. Now I just have to sort through them!!

Here's a quick photo without the moldings. The color is not great because the sun was coming in so strong. Ahhh....another thing I love about the room. 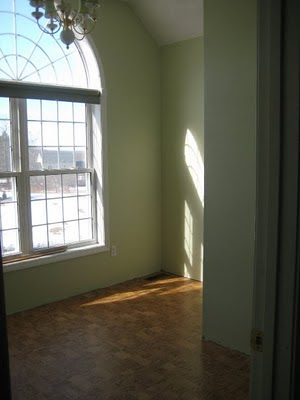 Finally!! I finished the gift album for my cousin's baby, Caleb. I've been working on this for a long time. I typically give the album at the baby shower but I was in temporary living for two months, as most of you know. I think I started in late Dec./Early Jan. I've put it away for a while, picked it up and worked on a layout or two and put it away again. Well, I had to hurry because I thought I'd be seeing the adorable little guy this past weekend. I was so sick with a rotten cold, the worst I've ever had....seriously. I still sound like I have a whiskey voice and the cold started Thursday. I do feel better though. I hope to meet Caleb this weekend.

Anyway, here it is. I won't bore you with every layout, but here are a couple. (ok, so I lied, I kept posting) 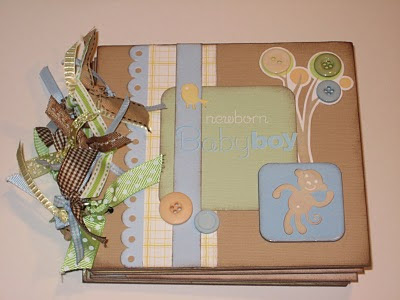 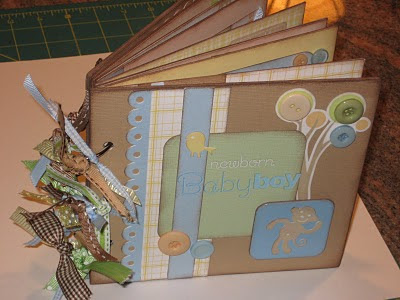 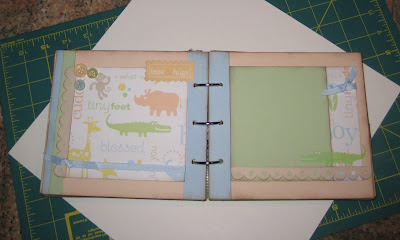 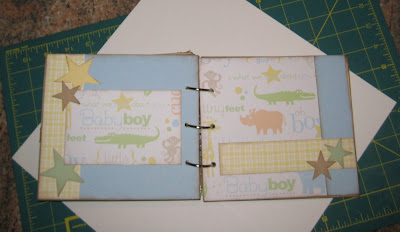 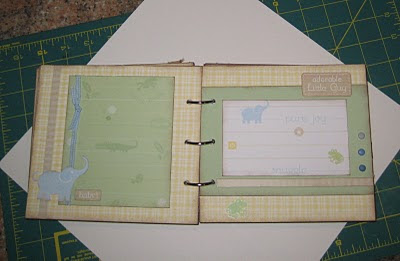 I've been sick as a dog this weekend with a rotten cold. I never get sick like this. If I'm not a little better tomorrow, I will call the dr. I feel like I have pneumonia or something.

My husband and I went out to eat for Valentine's Day on Sat. because we were celebrating my son's birthday Sunday. His birthday is Monday, the 15th, but he has to work from 1 to 9 p.m.

I clearly remember this day twenty years ago. My neighbor and I were both in labor at her son's 5th birthday party. We were best friends and everyone joked that we did everything together. The biggest laugh was when we both found out we were pregnant. She was due two weeks before me, but I ended up going early.

We had no family close by. We were living in PA and our family was back in MA. Her family adopted us for holidays. They were great! Half of them spoke in Arabic but we didn't care. We eventually could pick up a few things they were saying.

We planned on her having the baby first and she knew she would be having a c-section. We figured two weeks later, she'd be fine to watch my oldest son who was best friends with her son.

So we were both having contractions at her son's birthday party on the 14th. I thought they were false. I ended up pacing the floor all night long with real contractions. They weren't close enough so I just hung on. At about 4 a.m. I heard a car door shut and I peeked out the window. Sure enough, she was headed to the hospital. I was in a panic because I knew I'd have to go as well and I didn't know what to do with my son. Day care didn't open until 7 or so. So I held out for a bit and finally called the dr. who said to head to the hospital. My phone rang and it was my friend's husband saying that she was convinced I had to go too and she made him call. They made arrangements for her mom to come and get my 4 yr. old so I could get to the hospital. I ended up having Greg a couple of hours before she had Chelsea.

Sorry for the long reminiscing but I couldn't help it. I recently connected with our old best friends on Facebook and was shocked to see how grown up they were! It's been 13 yrs. since we've seen them.

I made this card bleary eyed and sniffling and sneezing so don't mind the simplicity! I wanted to match the tissue paper and bag though. 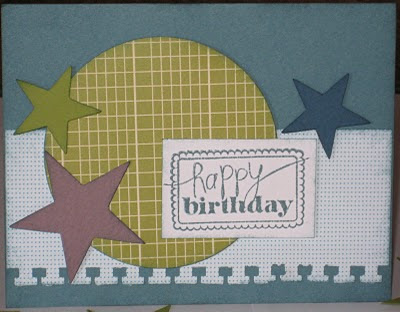 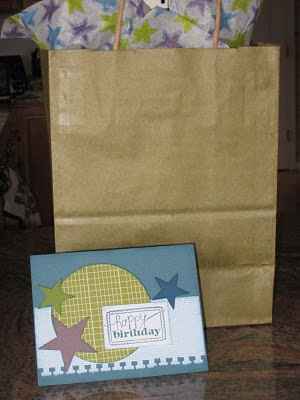 Dustin Pike posted on his blog about a little girl, Delia, who is going through chemo. If you'd like to send a card, I'm sure she'd love to receive it. Also, you can get some cute owls at Dustin Pike's blog to use. She loves owls!

Here's what I came up with. I'm not feeling great tonight. I really want to believe it's allergies but I have a feeling I caught my hubby's cold. So....my card is pretty simple but I think she'll appreciate it. 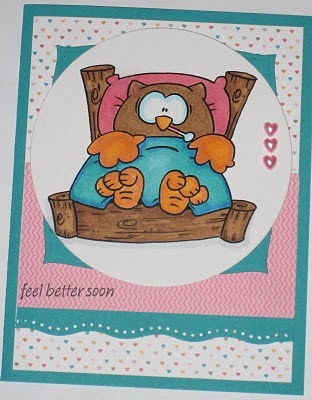 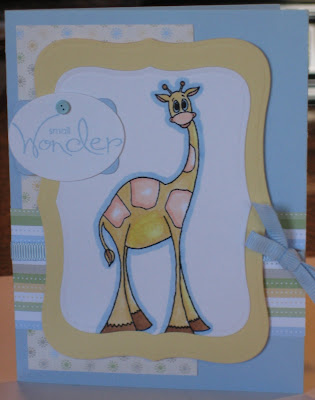 I made this for my cousin who just had a little boy, Caleb, yesterday. I can't wait to meet him!

I used my Labels 8 Nesties but the image wouldn't fit in the smallest one. So then I thought I'd just use my SU small oval punch. Nope, can't find my punches. I have a few in my stash but I can't find the ones I use most. I must have put them in a safe place. ;-) Soooooo....I ended up using two different shapes for the sentiment.

I used a digi stamp from Lost in Paper Scraps. I know I mentioned how talented Dawn is in a previous post but I just can't believe all the cute images on her blog!! I love giraffes?! They're my favorite. And did I mention her images are FREE?!! Check out her talents!

I used SU dps (forget the name of that pack), SU Bashful Blue, Barely Banana cs, SU Bashful Blue ribbon and the Small Wonder is from the SAB set, Whimsical Words. I just love the font on that set!! Thanks for looking!
Posted by Michelle Quinno at 2:40 PM 6 comments:

I made this card for my cousin who just bought a house. She works at the White House and we are very proud of her. She's young and single and buying her first house already! She's a cold weather person so I had to put snow on the roof. I hope it doesn't look too Christmasy!

I didn't adhere the oval yet because I wanted to stamp a sentiment either above or below the bow but I cannot find my sentiment stamps. I know they are in a box, right at the bottom of the pile though. I just didn't have the energy to dig. So I'll either need to print one out or take a deep breath and move those boxes to find my stamps.

I used a digi stamp from Lost in Paper Scraps. I was searching for digi house stamps to buy when I came across this one. She is incredibly talented and has a huge amount of freebies!! Go and check it out.

I used SU dp, cs and ribbon. Thanks for looking. (I dug through boxes tonight and finally found a few sentiments). 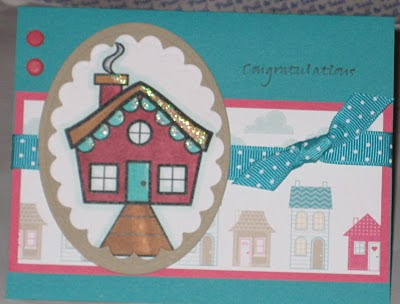 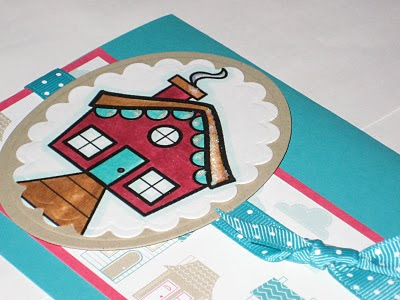 Posted by Michelle Quinno at 9:19 AM 5 comments:

I'm so excited! We (my husband) finally tore the carpet and padding out of my little stamp room. We (my husband) made an appointment to have the installer come down and measure the room for the cork floor. Hopefully it won't take too long.

In the meantime, I (really this time) am going to remove the frog border and my husband will prime and paint it a celery green.

I'm a little nervous about making decisions on how to organize because once it's done, I don't think my hubby will want to revisit it! We have several other rooms to finish in the house.

Here are the before photos. It's so hard to take a picture of the whole room. 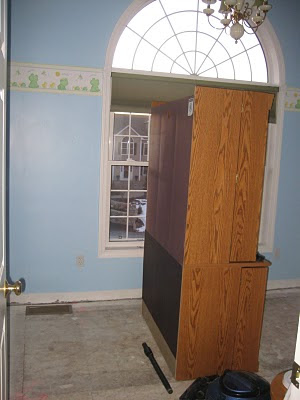 Here's the cork floor. It's hard to imagine what it'll look like but I chose it because I'll be wheeling back and forth with my chair and the guy at the store said it was easy on your hips, back and feet. Can't wait to have it installed! 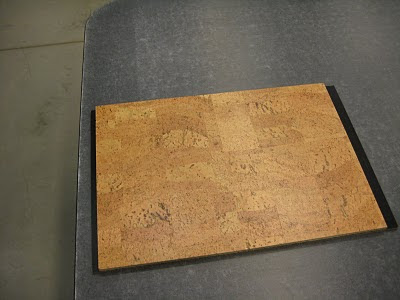 Posted by Michelle Quinno at 8:54 AM 5 comments: 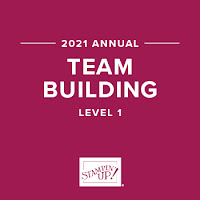 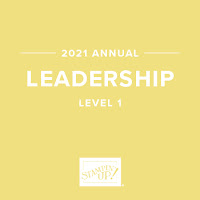 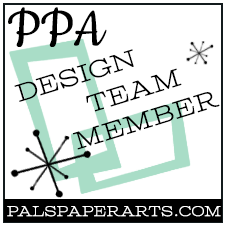 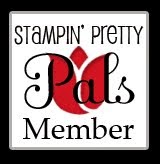